John Butler Design has gained a wealth of experience working on cruise ships in varying capacities, from structural refit modifications and design, to lightship analysis, inclining experiments and equipment integration.

JBD was engaged by Carnival as a technical consultant for a series refit proposals for the above P & O vessels. The refit proposals included a water amusement parks and slides to be added to their respective top decks, which would require structural modifications to bulkheads, decks and the funnel surrounds and funnel fairings.
JDB was required to carry out feasibility assessments on the proposed designs to ensure they would not impinge on existing structure and systems. This was carried out using AutoCAD for 2D drawings, and Strand7 for 3D structural analysis.
JBD saw the refit process from the early conceptual stages through to assisting onsite at the dry dock in Singapore to technically assist the refit implementation and installation process. 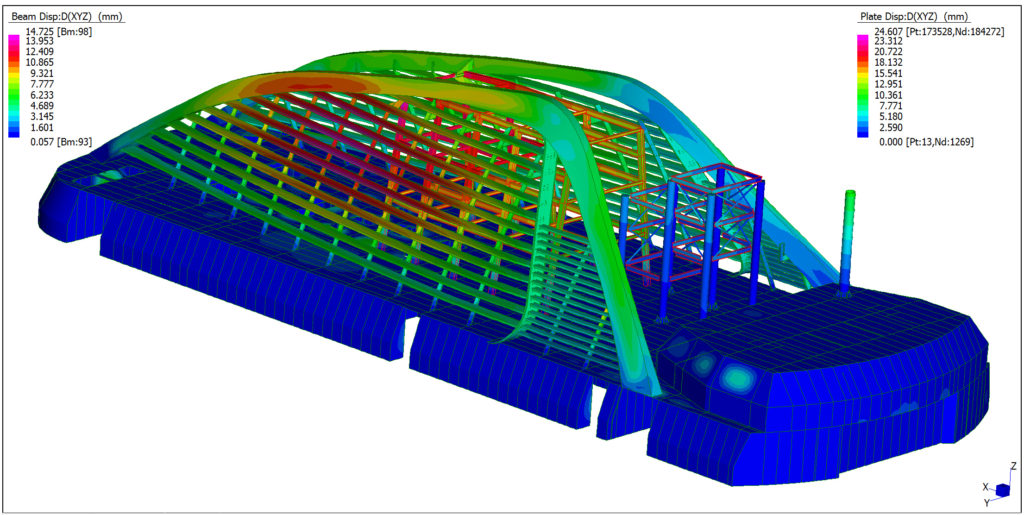 The local deck structure was assessed via a finite element model with dynamic loads applied to the deck at the footprint of the container. It was found that the deck structure was not adequate to support the additional loads. A remedial solution was determined and discussed with the client. Production drawings were then produced for the implementation of additional structure.

A pedestal was required to be designed to house a new Seatel Satellite Dome that was installed onto Deck 15 of the Pacific Dawn.

A finite element model was created of the proposed pedestal design and the local deck structure. A node was placed at the centre of the dome, to which the mass and wind based dynamic loads were then applied. Once the additional structure was confirmed as adequate, John Butler Design then produced the structural analysis reports for class review and the fabrication drawings.

Following the refit of the vessel, the modified interior layouts and space designation needed to be shown on the statutory drawings for the vessel. The general arrangement of Pacific Dawn was updated to incorporate the crew dining area, retail shop, water front restaurant and pool deck changes. In addition, fire control plan and escape plan of Pacific Dawn were updated to reflect the general arrangement changes. The fire equipment layout, evacuation routes and notation were checked to see if they were affected by the layout changes.

Due to cracking in a longitudinal bulkhead on the Sun Princess, John Butler Design was approached to analyse a proposed alternative arrangement that would provide the necessary strength and prevent the recurring failure. Two finite element models of the deck structure were created to compare the proposed solution with the original design. In the first model, a longitudinal shift in the deck was applied to simulate the racking behavior. The same longitudinal shift was applied to the proposed solution to assess the structural response. A production drawing of the solution was then produced to detail the rip out and installation requirements.